As I mentioned in my post yesterday my favorite night in Atlanta was Sunday. We made dinner at the Reynolds’ house, the boys smoked cigars {gross}, and I sipped on a crisp French Rose {the best}. The meal was inspired by ease, warm weather, and fresh ingredients we picked out at the farmer’s market. 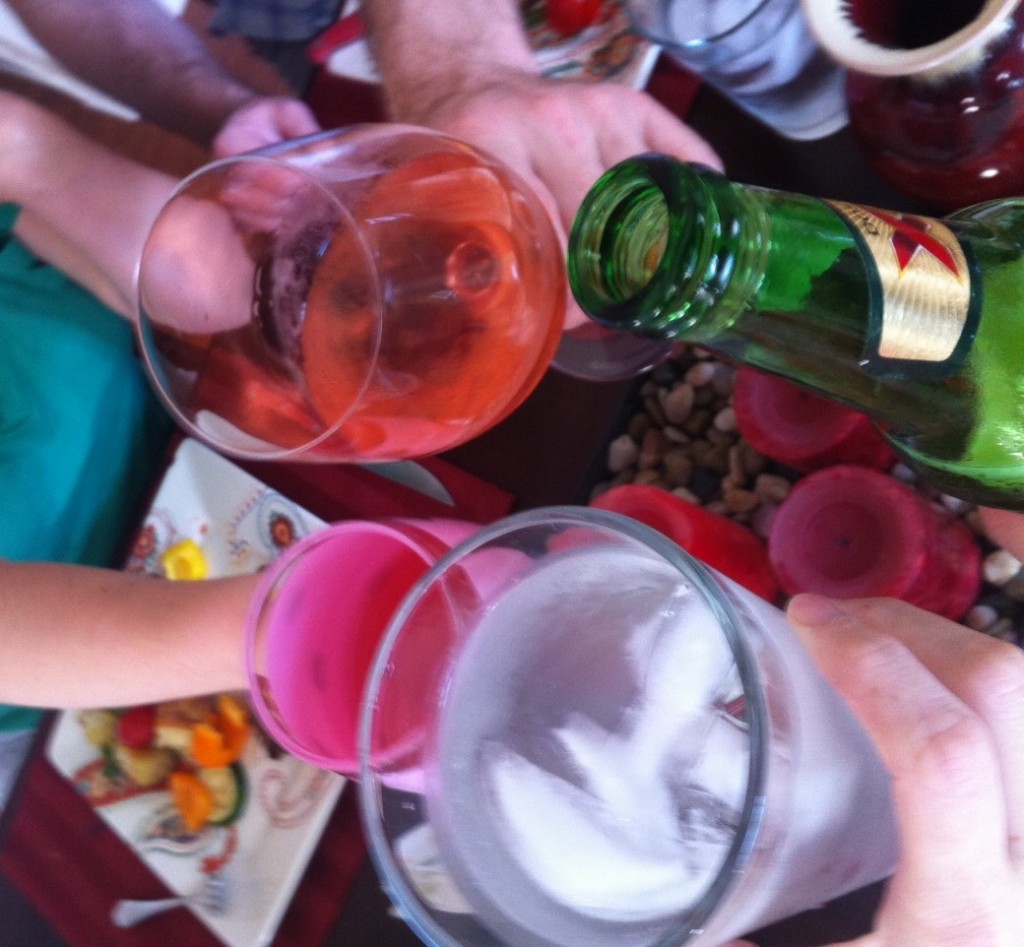 Got it all? Let’s get cookin’!

I started with the panzanella – which is basically just a bread salad. If you haven’t had one, I would *highly* recommend it. It’s simple and delicious. Plus you’re eating bread IN your salad. How can that be bad?! I decided to grill some of the vegetables but not all, to play a bit with texture and flavor. Since we were grilling the steak & shrimp also, I wanted each element of the meal to have a somewhat outdoorsy flavor.

The bread is actually the most time consuming part of this meal, but oh so worth it. Drizzle the cubes of bread with olive oil, salt, and freshly ground pepper. Coat the bottom of a skillet with olive oil and heat it over medium-high heat. When the oil is hot throw in about half of the bread – be sure not to overcrowd the pan as we want each cube of bread to have plenty of space to get nice and crunchy.

*side note* This is a great way to make super basic meals delicious. These “croutons” are fabulous with a roast chicken any time of year, and would make a great addition to a bowl of soup or gazpacho, too. *end of side note*

Turn and flip the bread cubes so each side gets cooked. I like to try to have a handful of bread cubes that are real crunchy and a handful that are less crunchy – it adds more texture and flavors to the panzanella.

While my bread cubes were finishing up, I threw some of the vegetables on the grill. Here are the asparagus, zucchini, and yellow squash as they were cooking. They were drizzled with a touch of olive oil and sprinkled with salt and pepper. I tried to keep each of the salad ingredients roughly the same size so it would look good and also be easier to eat. 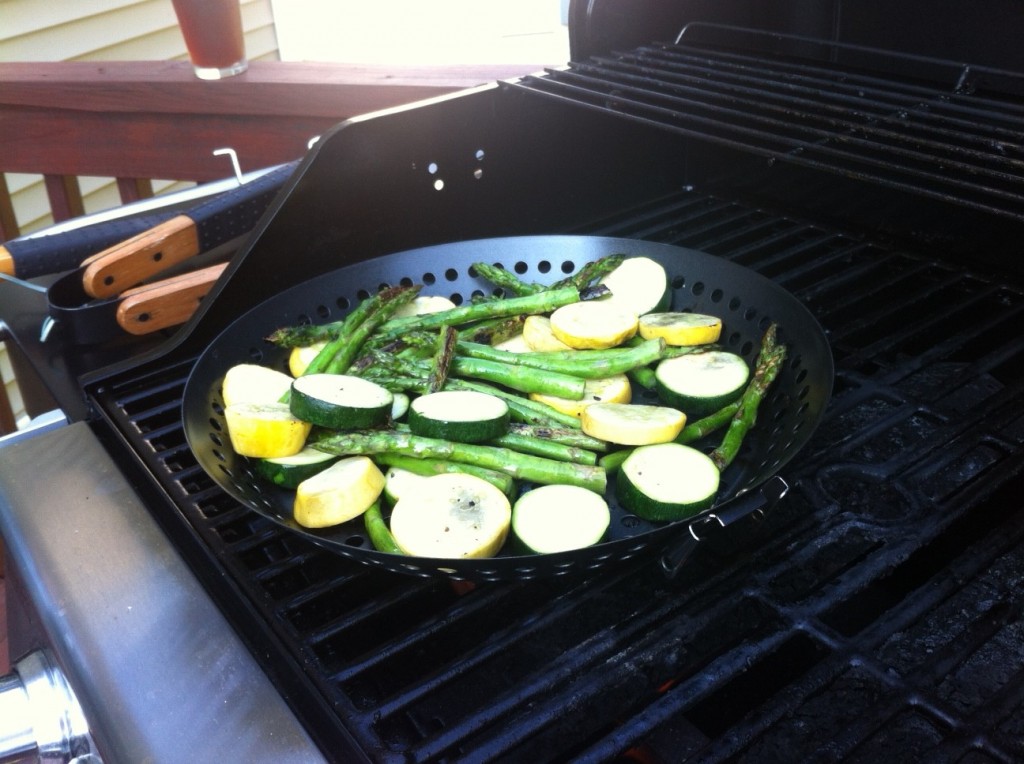 While those veggies were on the grill, I cut up the bell peppers and tomatoes and set them aside. I also removed the steaks from the refrigerator, patted them dry with paper towels, sprinkled them with salt and pepper, and let them rest at room temp for about 20 minutes.

When the vegetables were off the grill, I had the boys crank up the heat. This steak will change your life if you cook it right. It’s simple and delicious, but you have to start it out on HIGH heat. Close the grill and get that sucker HOT. 500 degrees at minimum. When your grill is hot hot hot, throw each steak on the hottest part of the grill and let it sit for 45 seconds. After 45 seconds, rotate the steak and let it sit another 45 seconds. This will create those beautiful grill marks you see in commercials but can never quite figure out how to make on your steak. You will notice that our steaks’ grill marks weren’t super amazing. We had some grill miscommunication so our heat wasn’t quite as high as it should have been when we threw those bad boys on.

After the second 45 second sear, flip the steaks and do the same thing again – 45 seconds, rotate, 45 seconds. Turn the heat down to about medium-high, move the steaks up to the 2nd level of the grill {away from direct heat}, and let them hang out up there for 10 minutes. At the end of 10 minutes, take your steaks off the grill and cover them in aluminum foil. Let them rest for another 10-15 minutes while you get the rest of the dinner together. They will be perfect. I promise.

While the steaks rested, I peeled the shrimp and sprinkled them with Lawry’s. Why is Lawry’s so magical? I mean honestly, it’s delicious. Shrimp cook really fast, so we threw those on the grill as we were pouring the wine. For the salad, just combine all of the vegetables and the basil {chopped or chiffonade}Â with the bread.Â Â Toss and serve with your favorite vinaigrette. I decided to make one because they really are so simple. Don’t let the thought of homemade dressing intimidate you. You can do it! Mine included a touch of dijon, champagne vinegar, olive oil, and salt and pepper. It was crisp and a little sour which was the perfect change of pace from the sweet caramelization of the grilled veggies.

Overall: a simple but delicious early summer meal, made even more delicous because we had sweet friends to share it with.