It’s April and I’m doing an experiment on myself.

It involves me, my running shoes, and hard work.

It all started last weekend when Kimberly and I were riding bikes and spending the afternoon in Santa Monica. Aren’t we cute?

As we were walking around and buying kelly-green shorts {we love us some colorful shorts!}, we saw a handful of exceptionally lean and fit runners. I have always wanted to ask a lean runner what their workout and eating routine is. And by “lean runner” I don’t mean like an Olympian from Kenya. Just a regular old “lean runner.”

At any rate, while Kimberly and I were discussing how often one would have to run to become the “lean runner” type, I threw out the idea of running five miles five times a week as an experiment on my own body.

For the next month I will be running five miles five times a week. I did a couple of practice runs last week and was impressed with my times. 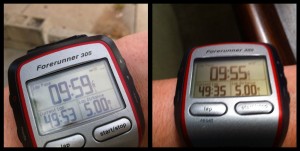 Go me! Quite frankly I wasn’t sure if I would even be able to finish the runs, so the fact that I did both of them at an under 10 minute pace was super encouraging.

Today I ran my first official 5 miles for the experiment. It didn’t go quite as well as last week’s runs.

There aren’t really any great excuses I can give you for why today’s run was so much slower — it was noon on the hottest day of the week, but really I just chose to not push myself as hard as I could have. So tomorrow, tomorrow, I will push a little harder.

High Fives all around!