This fall I will be running my tenth half marathon. Half, yes, not full. I ran one full marathon… that was enough for me. I may be convinced, however, to run the New York Marathon thanks to a certain Arkansas business consultant’s review of it… we shall see. 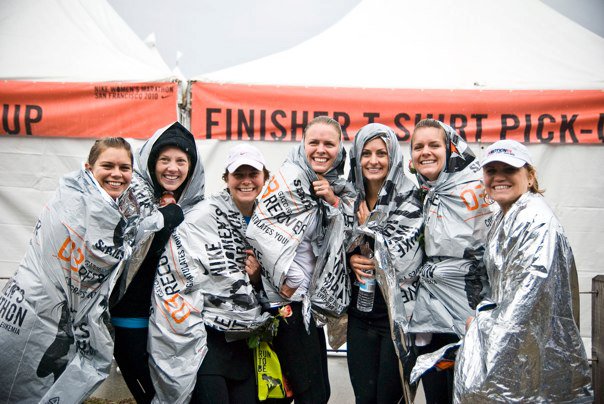 The most recent half marathon I ran, and the one I’ll be running again in October: The Nike Women’s in San Francisco.

When I started running it was nothing short of horrifying. I believed, with all of my being, that I was not cut out to be a runner. My body was not designed for such things. I would never be able to do it.

Any time I tried to run a mile…ONE mile… about  one third of the way in I would feel like I was going to throw up.  This would lead me to lying down/passing out, panting, in random people’s front lawns. It was not pretty.

After the 2010 Carlsbad Half Marathon.

Then something changed. I don’t know what it was, but for some reason I decided to keep trying. Glenn had been running a lot and I envied this cool athleticism he now had.  One day, he invited me to join him on a three mile hilly loop around his parent’s house. I warned him that I may only make it a mile {or less…} and he said that was fine.  Somehow, by the grace of God, I ran all three hilly miles.

I will never forget that feeling of accomplishment.

The 2010 La Jolla Half Marathon. One of the most challenging and beautiful courses I have ever ran.

Once I figured out that I could run three miles, I felt like I could do anything.  I would push us to run farther and farther, until eventually I suggested “What if we train to run a half marathon? Do you think we could do it?”

We followed what is still my favorite training schedule: Hal Higdon’s Half Marathon Training Plan. This is the program I am doing for this, my tenth half marathon, as well.

This time around, though, I am acting like it’s my first time training. I have set lofty goals for myself, but I am convinced I can do it. I’m training faster than I ever have, and am also {trying} to train in this OPPRESSIVE heat. It may kill me, but somehow I am determined to make it happen.

I’m nervous and a little afraid of failing {story of my life}. Even as I type this, my little heart is going pitter patter with anticipation! I know I am capable, though, and I know that this is a battle that is worth fighting. At least I hope it is.

Anyone else training for the first time, or training for a bigger goal than ever before? We can do it! Right?